It is the election season and Bernie is running for the Dem nomination and as usual there are all those people yelling about socialism or communism or Marxism…….inciting fear in any change that we could hope for….but that is somehow alright because we have a pandemic now and the GOP has become infected with the concept of socialism……you read that right…..according to the GOP socialism is good only when it helps the wealthy….. 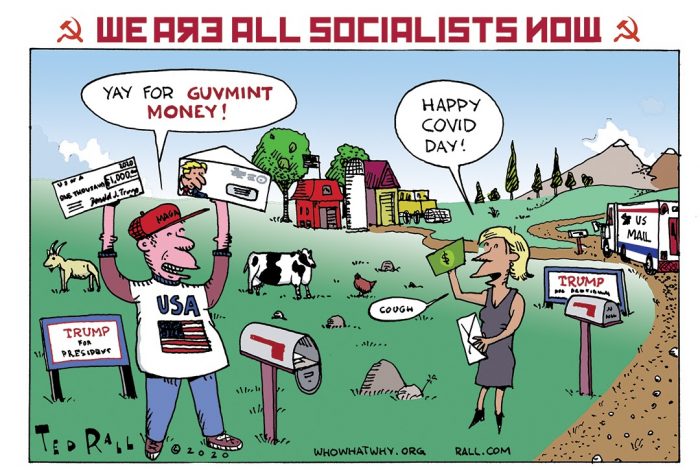 The Socialist Specter in Present-Day US Politics

The Bailout package is nothing but socialism for the wealthy……they throw some bones in the bill to make it more palatable to the masses…..but in reality it is nothing more than a robbery in progress….

As details of the Senate’s coronavirus stimulus plan slowly trickled in Wednesday, progressive critics characterized the sprawling legislative package as a brazen attempt by both political parties to use trillions of dollars in taxpayer money to bail out and further enrich large corporations while tossing mere crumbs to the most vulnerable.

“This is a robbery in progress,” wrote David Dayen, executive editor at The American Prospect. “And it’s not a bailout for the coronavirus. It’s a bailout for twelve years of corporate irresponsibility that made these companies so fragile that a few weeks of disruption would destroy them.”

The markets have rebound and rebound well….the promise of free cash has them dancing a jig…..the so-called “bear market” is over is the prediction……

A historic surge in jobless claims didn’t keep the stock market down on Thursday. Quite the opposite, in fact, as the Dow rose more than 1,300 points, or 6.3%, and the S&P surged by a similar percentage. The Dow has risen three days in a row and is up more than 20% in that span—which CNBC notes is the best three-day surge since 1931. The percentage increase means the market just went from a bear back to a bull, marking the shortest bear market in history, reports the Wall Street Journal. Whether it remains that way in extreme volatility is the big question. For the day, the Dow rose 1,351 to 22,552, the S&P rose 154 to 2,630, and the Nasdaq rose 413 to 7,797.

The increase comes as the House prepares to pass the massive stimulus bill approved by the Senate, seen as all the more pressing because of the millions of Americans who have lost their jobs. “Investors believe data like today will make it more likely that the House will pass the stimulus bill,” Jeffrey Kleintop of Charles Schwab tells the Journal. “The deeper and the worse the numbers are in the near term, the more possibility there is for a [fiscal] response, which powers the rebound on the other side.”

Need we say more about how corrupt the system is?

This news explains everything you need to know about the economy of the United States…..3+ million people without jobs means nothing to the markets…..free money however drives the rise…..

Plus people struggling will also get free cash….not as much as the markets but free any way……should make Trump more popular for Americans loyalty can be bought.

9 thoughts on “The Funny Thing About Socialism”